Our final day in Cinque Terre was off to an interesting start as there was a train strike scheduled from 9am to 5pm, making it very challenging to get in between the towns as we had the day before. We got up rather early for a breakfast and to say goodbye to Julie and Dan before they made the marathon journey to Rome (also impacted by the train strike). With the strike starting at 9 am and us needing to be in the 4th village by 1030, we decided to catch a train before the strike started.
When we arrived at the train station, we went to the information desk to ask for help as to where to go since the strike was impacting the schedule and our not-so-hospitable receptionist told us to run to track 3 now. We got there and there was no train…we waited, and waited, and waited, and finally one came along. We weren’t exactly sure if we should get on it or not, nor if any other trains would actually come, so got on the train and ended up overshooting our destination by one village (in Riomaggiore). We debated walking the 45 minutes back to the town but then saw that another train was coming in about 20 minutes so walked around for a little before taking the longest, least direct path to get to our desired village.

Since our activity didn’t start until 10:30 AM, we sat at a cafe and grabbed a quick cup of coffee to pass the time. The cafe actually had 2 stickers for New Glarus and Spotted Cow beer- a strictly Wisconsin thing- which was really funny since some in the US likely don’t know what this is. It ended up that the owner’s sister lived in Wisconsin and brought back some stickers when she came to visit (it was still a very Italian spot). The time had finally come for our main activity of the day- pesto making class. 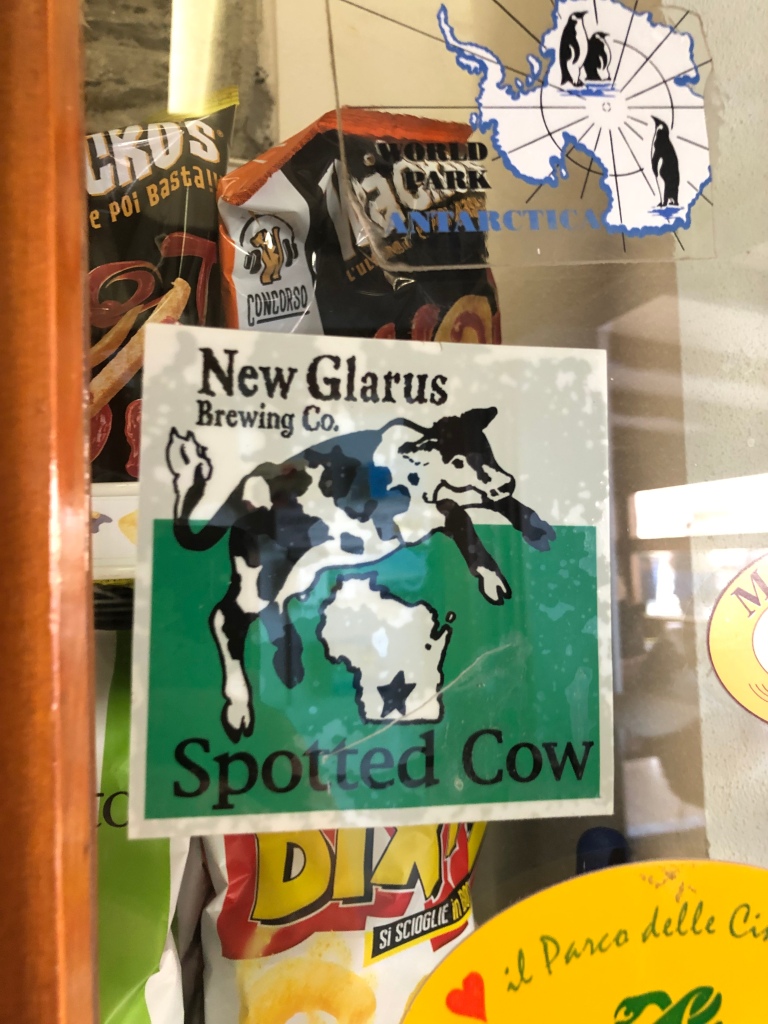 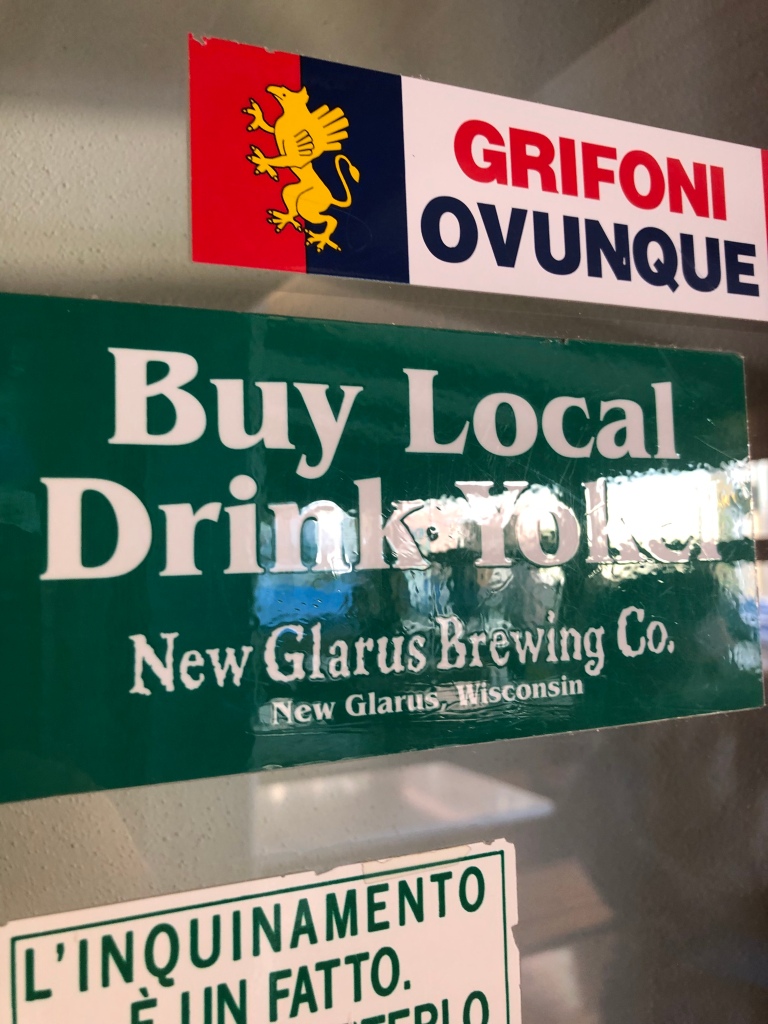 We had heard about this activity the night before from the couple that we had come across 5x earlier that day. So at the recommendation of Matt and Laura, we signed up and were shocked to find nearly 40 people waiting to get in (Matt & Laura not to be found). The host explained that the next few days had terrible weather predicted so he had to combine 3-4 classes hence the large size. Matt & Laura showed up a little late and we had just started to make our pesto.
Making pesto actually didn’t seem all that challenging- peel the basil off of the plant (use the smallest leaves), ice the basil leaves, put a tiny bit of garlic and salt in a grinder bowl, mix, add basil leaves and pine nuts, mix, add an unhealthy amount of cheese, mix, and then add some olive oil, mix. Our pesto was the besto – it was truly out of this world. Very fresh, very cheesy, and very delicious. The host brought his pesto around to taste compared to ours and although his was a much better consistency, he had blended it earlier and was no where near as fresh and tasty as ours (he did this to prove the point about color and freshness, we’re prepared to spot good from bad pesto now). 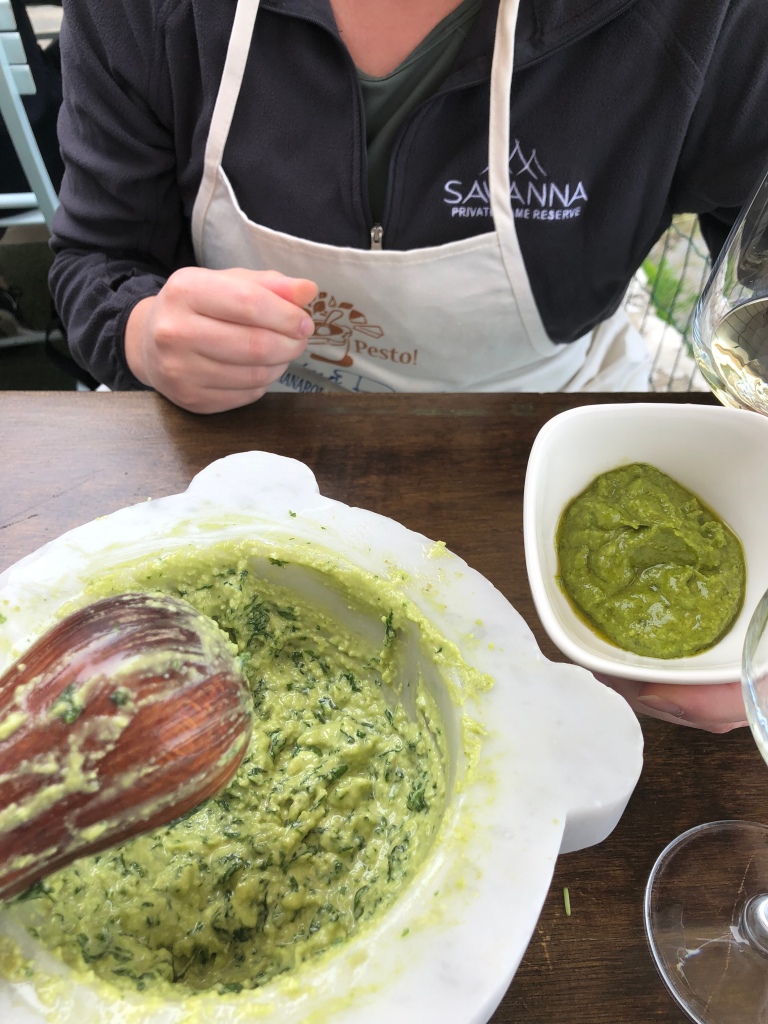 After about 90 minutes of hard work for our labor, we were rewarded with some local wine grown just above the restaurant as well as a large meat and cheese plate to eat with our pesto and a large thing of wine. The four of us enjoyed the views of this restaurant which was situated up on a perch overlooking Manarola and the water. The owner had actually WON this restaurant in a contest about 10 years ago – it was a crazy story he shared and now its a very successful spot that is often written about online (which is how we’d found out about the spot, let alone the great pesto class). 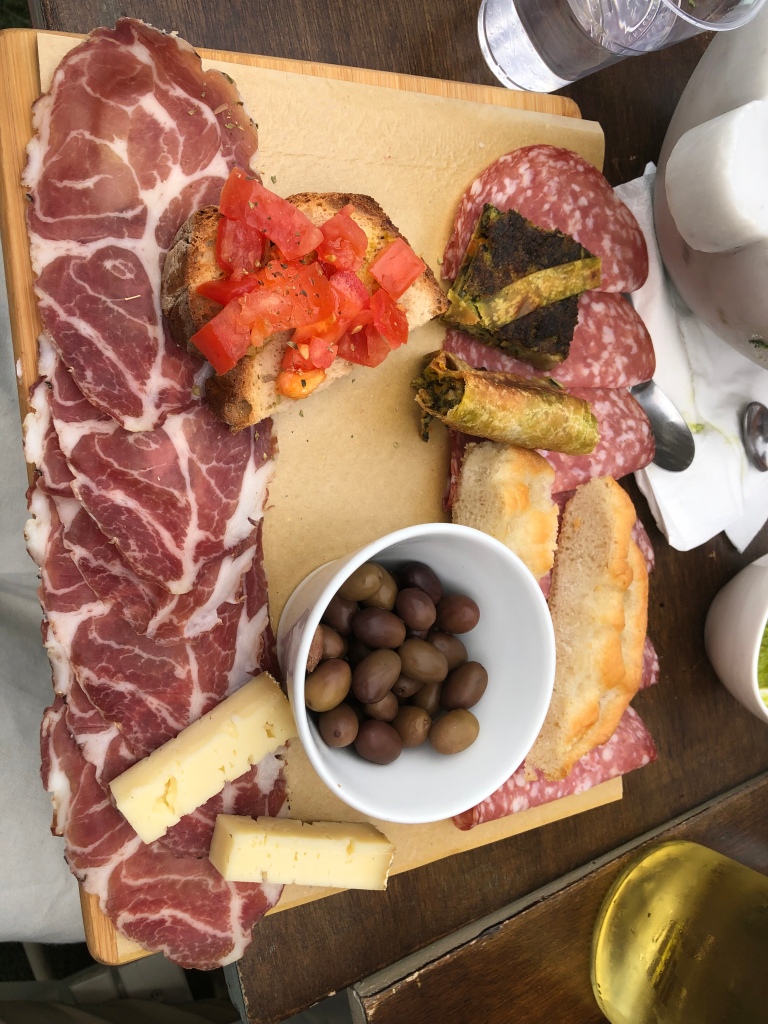 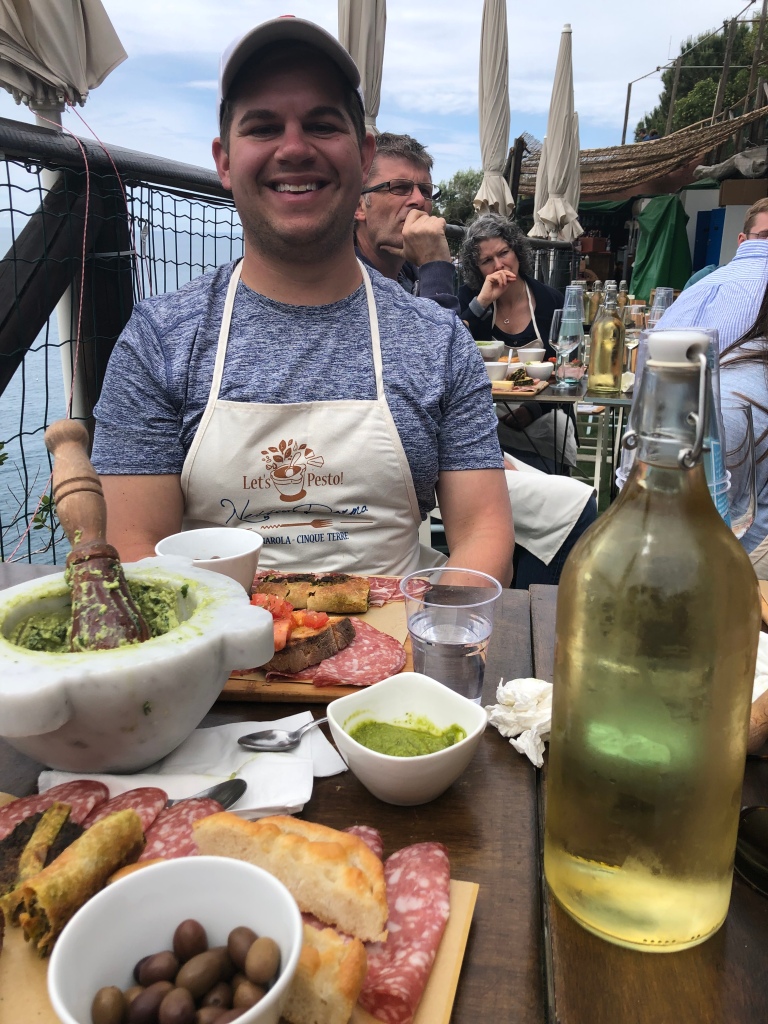 Post class, the four of us decided to do a hike that we hadn’t done yet, from Monterosso (our town) up to an old church/light-house to see all five villages. The hike was all of 45 minutes but it was uphill literally the entire way. Even though it was very challenging, the views were spectacular. We got tons of great photos and were glad that we saw something new today. After the hike, everyone had worked hard and deserved (and consumed) a gelato from a spot we’d been wanting to try the past few days.

We said our good-byes to our Philly friends and exchanged numbers, knowing that we’ll see them again soon in a US city or traveling around the world. We made our way back to the hotel to shower and rest before stumbling upon a little hole in the wall spot for dinner that was ranked the 3rd highest restaurant on trip-advisor. The food lived up to the expectations as we had our final meal in Cinque Terre and enjoyed a little walk on the beach before heading back to the hotel.
While today’s adventure only resulted in 9 miles and 125 stairs climbed, it was still full of all of the excitement from the prior day. The HoneyMeyers are big fans of Cinque Terre and we’ll certainly be back here soon as well.
Off to Rome! (and down to the final week… 😦 )